One in a Million

The Saugus High School Students In Action (SIA) team is a Multiplying Good One in a Million Award recipient. The team is among the millions of people who are putting others first and using service as a solution to the problems we're facing. Read their story below then nominate someone who's making a difference during this unprecedented time! 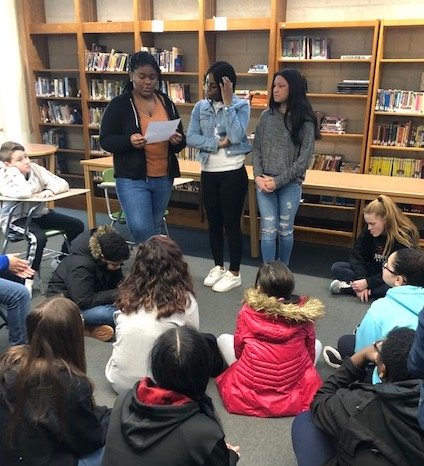 One in a Million award recipient: SIA team from Saugus High School

Where they're multiplying good: Massachusetts

How they're multiplying good: The Saugus High School SIA team epitomizes what it means to be Students In Action Leaders. They started out as a small yet mighty group, tackling sensitive issues in their school including cultural insensitivity, lack of representation, and racial profiling. Recognizing that knowledge is power, the team facilitated peer-to-peer workshops to raise awareness about the importance of diversity, cultural sensitivity, and racial equity. To ensure that their peers' voices were heard, they also conducted surveys about the climate of Saugus High as it pertains to race relations and shared the results with their administration. Their findings were so profound that they were invited to the Saugus District's "Social Justice for Saugus" event. The team rose bright and early on their day off of school to raise awareness about Cultural Competency and the need for representation for students of color. They educated over 50 Teachers, Deans, and Principals, who in turn were made aware of a large that existed between adult and student perceptions. One Principal was so moved that he agreed to partner with the SIA team to bring them to his elementary school and read books with characters that reflect the student demographic.

These SIA Leaders are not stopping there! The group is now in the process of creating a district-wide curriculum to discuss and address these issues, in order to create a more just and equal community. The Saugus SIA team identified a set of issues that directly affect them and their communities. They then created an impactful way to address those issues and set out to make a difference. They are truly one in a million and deserve the recognition and celebration that comes with such dedication and passion.