One in a Million

Sri Nihal Tammana is a Multiplying Good One in a Million Award recipient. He’s among the millions of people who are putting others first and using service as a solution to the problems we're facing. Read his story below! 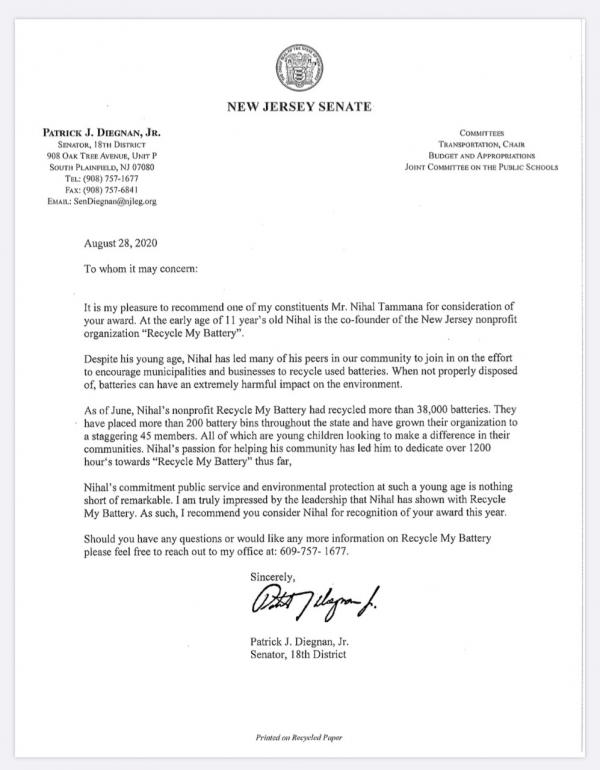 One in a Million Award recipient: Sri Nihal Tammana

How he’s multiplying good: He is One in a Million. Nihal Tammana, an 11-year-old who founded a non-profit organization (Tax ID: 85-2206747) Recycle My Battery to spread awareness about why it's important to recycle used batteries. So far he and his team of 40 kids have recycled more than 38,000 used batteries with the help of Call2Recycle which is the nation's largest battery recycling organization. They have educated more than 150,000 adults and 60,000 kids about why it's important to recycle used batteries properly. He has spent more than 1200 hours so far on this project in the past year. He was nominated to the New Jersey state recycling award (NJDEP), Governor's Environmental Excellence Award for 2020, and Prudential Award for 2021 by Senator's Sam Thompson, Vin Gopal, Patrick Diegnan, Bob Menendez, and Edison Mayor Thomas Lankey. He was also the recipient of the Citizens Award for 2020 from Woodbrook Elementary School, Edison NJ.